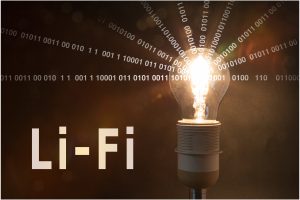 OWC can be found in Light-Of-Sight or LOS and Non-Light-Of-Sight or NLOS. LOS systems are generally employed in static communication areas like indoor sensor networks, where the transmitter and the receiver are aligned in a fixed position. NLOS communications are better confined in rooms, this type of technology makes it much more secure in banks and government agencies where confidential information can’t be intercepted.

The future of Internet

LiFi is quickly becoming an option to being the future’s next best internet solution. Due to its low cost, seems like a better way to see and handle how we transfer data and surf on the web. Also it works at the speed of light, not depending on the radio spectrum, which not also makes it cheaper than WiFi, but also faster and much more secure. Since it only needs an LED bulb and a receptor its becoming more and more suitable both for speed and security. Some experts say it’s the successor of WiFi itself, but for now it’s only on its testing and beta stage; and it also would need help from WiFi to work properly on its early stages.